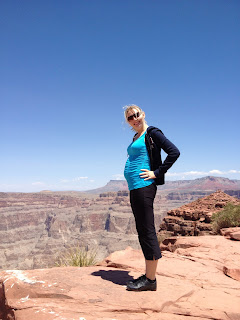 Just in case you're thinking about skipping a trip because your wife is pregnant,  think again.  Julija was still tired but more worried about no vacations for the next five years so we decided to go together to Las Vegas. I had a work trip already planned so she tagged along for the Babymoon.

The trip started with two 2.5 hour air legs -- just about perfect with Julija siting on the isle.  It never seems like much to sit on an airplane,  but she was exhausted by the time we got to the hotel.  Next day we got up and on a bus to the West Rim of the Grand Canyon.  This was a 3hr each way bus trip but well worth it because of all the one-on-one bus lovin. I think she actually surprised herself on this venture and didn't complain even once.  I think it was just good for her to be thinking about something else for a bit.  Now I will warn all pregnant women to stay away from the native-american-prepared-beef-bbq...

We followed up the next day with a morning at the spa for her. Over priced but extra special for that adventurous prego girl. The rest of the week was nominal... lots of walking, relaxing by the pool and eating for her.

Six days later we're back... and man it's great to be home :)  Nothing left to do but sit around and watch each other get fat :)